Sends Him Off with a Heartfelt Salute

“Duty, honor and country” are three words that Marc Kagan lives by as a retired flight nurse for the U.S. Air Force Reserve. He is now a cardiac catheterization lab nurse at Manatee Memorial Hospital and, like so many others in his profession, he is stepping up to help in different areas of the hospital to support patients battling COVID-19.

When he found out one of the patients who had succumbed to the virus was a fellow veteran, his response was immediate and heartfelt — to send him off with a military honor. “That’s when I decided to give him a salute,” Kagan says.

The image of Kagan saluting the fallen veteran has been seen worldwide on social media — and it has touched the hearts of thousands. Kagan emphasizes that he did not do it for a “pat on the back,” but as a way to pay his respects at an unprecedented time in the history of his community, the nation and the world.

Kagan has since donated his military flag to the hospital, to be used if any other veterans are lost to COVID-19. It is a burial flag, folded into a triangle, in accordance with U.S. Armed Forces tradition. “Wouldn’t it be respectful if we could take the flag, place it over the stretcher, and bring the patient to the morgue with military respects and honor?” says Kagan.

A tragic reality of COVID-19 is that families often are not able to be with their loved ones at the bedside or have traditional funerals and military sendoffs that mean so much. This is one way to pay respects and honor veterans’ service to the country.

Get important information about COVID-19 →

A Duty to Serve 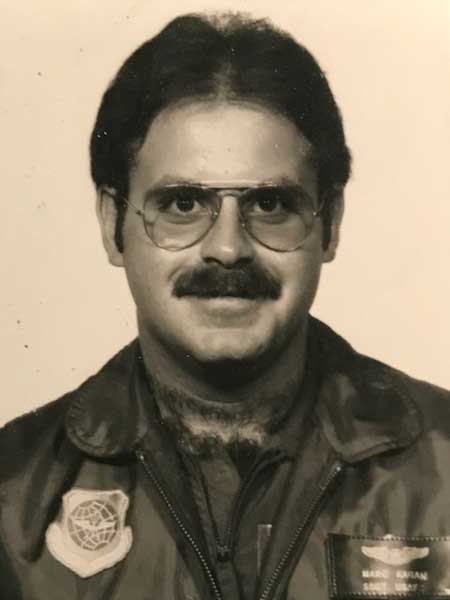 Kagan joined the Air Force in 1976 and always served in a medical capacity, including roles as a combat medic and a flight paramedic in the Reserves. He also was on active duty for five years, when he received his medical training, and he was subsequently commissioned as a flight nurse in the Reserves. “I was deployed during Desert Storm [a military operation to expel Iraqi military forces from Kuwait, in 1990-91]. When I came back, I was actually a stronger person,” Kagan says. He remembers the many people he met in his two decades of service and friends who “gave the ultimate sacrifice.”

As the nation battles a very different foe, Kagan serves as a registered nurse. His role is to help nurses and techs move in and out the COVID-19 containment area at the hospital. This involves helping staff put on and take off their protective equipment, so that they can safely take care of patients. He has seen the indentations left on the faces of his colleagues after wearing their N95 masks for hours. “I call them the marks of a hero,” he says.

His Message from the Front Lines

Having seen firsthand the devastating impact of COVID-19, Kagan is passionate about protecting others and spreading the message for safety. “We really need to take care of our community, and take care of our people,” he says. Kagan urges people to be safe and practice social distancing. “This is real,” he says. “Protect yourself. If not yourself, protect others.”